HB 838 was passed as an attempt at saving face and as a distraction for conservative voters by the trembling Republican legislators who voted for passage of a thought crimes bill under pressure from the Chambers of Commerce, the Democrats – including Marxist Black Lives Matter and Antifa rioters who have been terrorizing Americans in Atlanta and around the country for more than a month.

Protections for police was included in the committee process of the hate crimes legislation later passed by the Republicans, but was removed when the GOP majority caved to the Democrats and the BLM rioters.

“We’ve had ongoing discussions with the minority party for the large part of two days and within our own Republican caucus and we’ve reached a compromise that I think everybody will be pleased with,” state Sen. Bill Cowsert (R) said, ABC News reported.

After reviewing the legislation, the ACLU has noted that it can be interpreted to actually reduce penalties for killing a police officer. The liberal AJC happily wrote that up here.

We predict that Kemp will veto this one. We blame massive incompetence.

It’s a short video they posted.

Here are members of the Soros-funded ( see also Ford Foundation) open borders ‘Georgia Latino Alliance for Human Rights’ (GLAHR) screaming at cars in traffic to “Abolish ICE.” This is one of the Marxist groups invited to a Gwinnett County (GA) July 31 panel discussion on 287(g) by Commissioner Marlene Fosque. They dropped out when they found out this pro-enforcement writer was on the panel.

GLAHR was founded by a now room-temp Mexican diplomat (Teodoro Maus) and Mexican-born Adelina Nichols, who has ties to the communist party. GLAHR is part of a larger group demanding that Atlanta officially become a sanctuary city.

These are people who advocate to abolish the entire federal ICE agency and end any enforcement of human trafficking, immigration or borders.

Readers may remember last week when then Acting United States Secretary of Homeland Security Kevin McAleenan was shouted down at Georgetown University after being invited to be keynote speaker for Georgetown’s 16th annual Immigration, Law, and Policy Conference.  MacAleenan left the stage without being allowed to offer his thoughts on immigration because some students have been taught that the right of free speech only applies to confirmation of the anti-American dogma they have been fed by the haters who run our educational system. CampusReform.org has a write-up and video here.

According to Azadeh Shahshahani, Iranian-born Communist sympathizer who is the Legal and Advocacy Advisor at Atlanta’s Project South Institute to Eliminate Poverty and Genocide, preventing McAleenan from his sharing wrong-thought on immigration and borders “is what solidarity looks like.”

It should be noted that Shahshahani was one of the anti-enforcement panelists selected by Gwinnett County Commissioner Marlene Fosque for a July 31st discussion of the decade-old 287 (g) program in the Gwinnett jail. Along with Adelina Nichols of GLAHR she dropped out at the last minute in an effort to prevent this writer from sharing facts on 287(g). Dropping out of the event did not prevent these radicals from sending in their own hate-trained youth to try to prevent me from speaking with screams and signs inside the auditorium. Photo here. More from the growing file on Shahshahani & Co. here and here.

What you won’t read in the liberal AJC

GLAHR, along with ‘Project South Institute for Elimination of Poverty and Genocide‘ is one of several groups hosting a “community forum” against the lifesaving 287(g) program tomorrow in Gwinnett County. See my recent write up here.  We are watching to see if the Gwinnett Daily Post and the “compelling” AJC cover this coming anti-287(g) event put on by these illegal alien lobby groups.

The open borders GLAHR corporation is run by a Mexican-born communist named Adelina Nichols. The two groups were invited by Gwinnett County Commissioner Marlene Fosque to a two-sided forum in July but backed out when they learned I was a panelist. The Gwinnett paper and the AJC both covered that event.

Above is a recently posted photograph on the GLAHR Twitter page of their booth at an event last week. Look carefully.

See the banner in the back of the booth?

Don’t know what “La Migra” means? It is a Spanish language slang term used to describe any law enforcement official who is authorized to enforce immigration law.

“A derivative of the Spanish term migración (migration) or related to migraciones – the offices dealing with immigration issues in Spanish-speaking countries – the term has become shorthand for both agencies and individuals that deal with immigrants and immigration. Both the U.S. Immigration and Customs Enforcement (ICE) and Border Patrol agencies can be referred to as La Migra, as well as the personnel who work for them, including immigration officers and agents who perform inspections of cars crossing the border or in search of illegal immigrants in places of business.”

So, what does the illegal alien lobby mean when they say (they say it a lot) “Chinga La Migra?”

“Chinga” is a slang word in Spanish for the “F word” – and we don’t mean firetruck.

You can see for yourself here and here.

GLAHR (2017 contributions and grants, $458,557) has been organizing illegal aliens in Georgia since 2001. From the GLAHR website, you can – and should –  see here for an example of how far along they are with their “Peoples Committees.” Nichols has t-shirts and sweatshirts for her anti-borders followers, which read “GLAHR – DEFY, DEFEND, EXPAND” – here.

Pro-enforcement Americans should learn when to say “Viva La Migra!”

But be advised, they hate that. 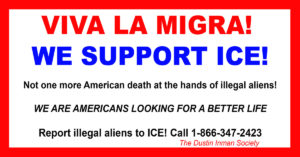 Where and when: Collins Hill  Branch of the Gwinnett Public Library, 455 Camp Perrin Rd. Wednesday, October 2, at 6:PM.

The Georgia Latino Alliance for Human Rights (GLAHR), the Project South Institute for the Elimination of Poverty and Genocide, Women Watch Africa Inc. and BAJI – the Black Alliance for Just Immigration are listed in online fliers as organizers of the event.

GLAHR was co-founded in 2001 by former Mexican diplomat Teodoro Maus and Mexican-born Adelina Nichols. Nichols, who now runs the anti-borders company is a longtime activist against immigration enforcement and a proponent of drivers licenses for illegal aliens.  Legal & Advocacy Director for Project South is Iranian-born Azadeh Shahshahani who has worked with the ACLU and an off-shoot called ‘Georgia Detention Watch’ to end 287(g) agreements nationwide and to abolish detention of illegal aliens.

The event is intended to perpetuate false, race-baiting accusations against the 287(g) program and ICE and anyone who supports immigration enforcement.

Endless and shameless use of the term “immigrant’ to describe illegal aliens should be expected.

These are the goals the organizers hoped to pursue for in a six-person July panel discussion held by Democrat Gwinnett County Commissioner Marlene Fosque that included pro-enforcement panelists from the Gwinnett County Sheriff’s office, ICE and this writer from the Dustin Inman Society. Angry that the Dustin Inman Society was to be part of the event, Nichols, Shahshahani and the staffer from another open borders concern called ‘Asian Americans Advancing Justice’ dropped out at the last minute.

Fosque found three anti-287(g) stand-in panelists including a board member of the infamous and discredited GALEO , Democrat state legislator, Brenda Lopez Romero ,who is a candidate for congress in Georgia’s Seventh District. The discussion went south when Romero, unable to offer factual arguments against using the 287(g) crime-fighting tool, decided to change the topic to attacking D.A. King (me) personally.

The fact that the radical groups dropped out of the panel did not prevent them from igniting and displaying the hate for immigration enforcement they have instilled in their young followers who disrupted the meeting multiple times with screams, jeers and a display of signs inside the Gwinnett County commission auditorium directed at the ICE Agent panelist and this writer. The liberal press wrote it up with a ‘victims of borders vs oppression’ angle complete with false descriptions of pro-enforcement Americans being “anti-immigrant and “anti-immigration.”

According to the illegal alien lobby’s flyer, the anti-287(g) forum will be held at the taxpayer-funded, (open to the public) Collins Hill Branch of the Gwinnett Public Library, 455 Camp Perrin Rd. Wednesday, October 2, at 6:PM.

For Georgians who have not been exposed to the tax-exempt-trained and hate-fueled opposition to borders and immigration enforcement, the meeting is a ‘don’t miss. ‘

Note: It is unknown if there will be law enforcement present but having your camera at the ready is highly recommended.