Note, this piece was originally posted on the Dustin Inman Society blog.

Oh, and BTW: They seem to not approve of the concept of nationalism.

The morning after my late-night phone call/voice mail to an AJC reporter twenty minutes after his story on a Gwinnett County 287(g) panel discussion in which I participated hit the internet, the AJC changed their “anti-immigrant” description of me in the online version of the story to “anti-undocumented immigrant…” Then, in the same story for the next day’s print version ran a photo of me with the caption describing me as “a controversial anti-immigration activist.”

Without exaggeration, by phone, email and letters, I have told these people about fifty times that I fight for enforcement of immigration and employment laws and for sanity in immigration levels. That my adopted sister is an immigrant.  As are many donors and some members of the board of the Dustin Inman Society, which I founded in 2005.

The most recent example is a letter to the editor that was sent – and published – last June in response to another inaccurate and libelous depiction of yours truly as “anti-immigration” that was also changed after I complained:

“A recent column by the AJC’s Bill Torpy on the front of the Metro section falsely referred to me as an “anti-immigration activist.” The widely known truth is that for the last 15 years I have proudly fought for sanity in immigration and enforcement of American immigration laws. That effort is easily and succinctly described as “pro-enforcement.”

For the record – yet again – I am not “anti-immigration” any more than the folks at Mothers Against Drunk Driving are “anti-driving.” Neither is my adopted sister, who is an immigrant.

In today’s media, the angry leftists who scream in American streets waving placards that literally demand an end of immigration enforcement are usually described as “civil rights” or “immigrant rights” groups. Never the obvious “anti-enforcement” groups.

A majority of Americans – including millions of immigrants – support honoring our rich tradition of immigration with the unapologetic enforcement of our very liberal immigration laws. The fact that media writers intentionally and deceptively depict us as being “anti-immigration” is an illustration of the inherent liberal bias and eagerness to smear honest Americans on the most critical issue of our time.

Note: I have no idea why some of the text above is larger font and I cannot make it go away...

Either these very liberal editors and reporters don’t read their own newspaper, are unable to retain information longer than an hour – or they are driven by an agenda to dishonestly marginalize anyone who does not adopt the “immigration enforcement is extreme/racist” position. To be clear. I firmly believe it is the latter.

The reporters and leadership of the Georgia’s largest newspaper should be regarded as an organ of, and for, the illegal alien lobby from here on. I have asked for another correction and retraction.

The editor of the AJC is Kevin Riley. Despite the fact that the shrinking AJC has no public editor, neither he or most of his editors respond to my emails or phone calls. *Notable exception: Editorial Editor Andre Jackson, who I believe to be an honorable journalist in every sense of the word. Andre Jackson is the only employee I know at the AJC that I trust.

The story is too long to tell at one time here, so only a little expansion for now.

On a panel discussion in Gwinnett County focused on 287(g) an AJC reporter filed this story late on the same night as the event ( again, they don’t seem to like the self-description of “proud American nationalist” at all). The 1996 federal tool, 287(g) is designed to locate illegal aliens who land in local jails. Note that the anti-287(g) participants (some who dropped out) are referred to as “immigrant advocate groups.”

In the first try, I am described in this paragraph with

“King spoke first and audience members opposed to 287(g) greeted him with signs filled with his previous anti-immigrant rhetoric. His opening statement riled them further.”

After my phone call complaint, it was changed to:

“King spoke first and audience members opposed to 287(g) greeted him with signs filled with his past comments regarding undocumented immigrants. His opening statement riled them further.”

In the print version (that is also sent out electronically) of the same story that ran on August 2, the AJC editors reversed the reporter’s previous correction and inserted a photo of me with the caption:

“D.A. King, a controversial anti-immigration activist, represented the sheriff’s office on a panel discussion of the 287(g) program.” —  All italic emphasis mine.

Not only is the “anti-immigration” activist description wrong. but the AJC has invented out of thin air the notion that I was somehow representing the sheriff’s office. I would have been very proud to do that, but I was asked to speak on 287(g) as president of the Dustin Inman Society.

–>*Update: Too funny: On Wednesday, August 7 on page 2. the AJC corrected the whole cloth fabrication that I was somehow on the panel as a representative of the Sheriff, here. But the “credible”, “compelling”, “complete” coverage AJC editor Kevin Riley constantly tries to sell on radio ads never corrected the fake news that I am an “anti-immigration activist” – while they portrayed the anti-enforcement mob as “immigrant advocates.”

Note to the propagandists at the AJC: Even the New York Times has made that correction on my motivation. 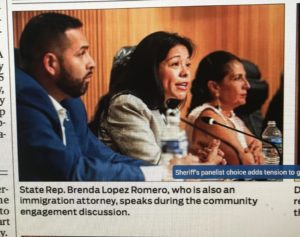 The young AJC reporter asked me one or two questions – and that was clearly an after-thought formality on his way out the door. His lead query to me?

“Do you think you inflamed this event? …by being here, I mean.”

Contact info for the AJC leadership here. The columns the AJC editorial page team has published from me listed here. Did they inflame anyone by printing them?

I have sent them a letter to the editor about the fact they use the disgraced SPLC as an arbiter of “hate…” I will post it tomorrow if they don’t run it.

*Update: An edited and shortened version of my letter finally ran. Many thanks to Mr. Andre Jackson.