It should be noted here that contrary to the labels presented on Martha Zoller’s radio show today, the amnesty legislation (there would be zero hearings) being discussed in the U.S. Senate will not be limited to DACA recipients. I called in and went on the air with Martha to say exactly that. I am grateful to Martha for taking the call. I am in hopes of posting that conversation here but need to access Martha’s podcast to do it.

*Updated: Martha did not include my on air call correcting the Rangel interview on the amnesty proposal being only for DACA recipients in her podcast. I did find a segment of here show the day after the Rangel interview in which she had more to say on her personal position on amnesty and “the likes of D.A. King.” You can hear that one and read as transcript here. Because of the results on the one-time amnesty of 1986, I am in the “amnesty-never” camp. Republican radio host Martha Zoller isn’t. 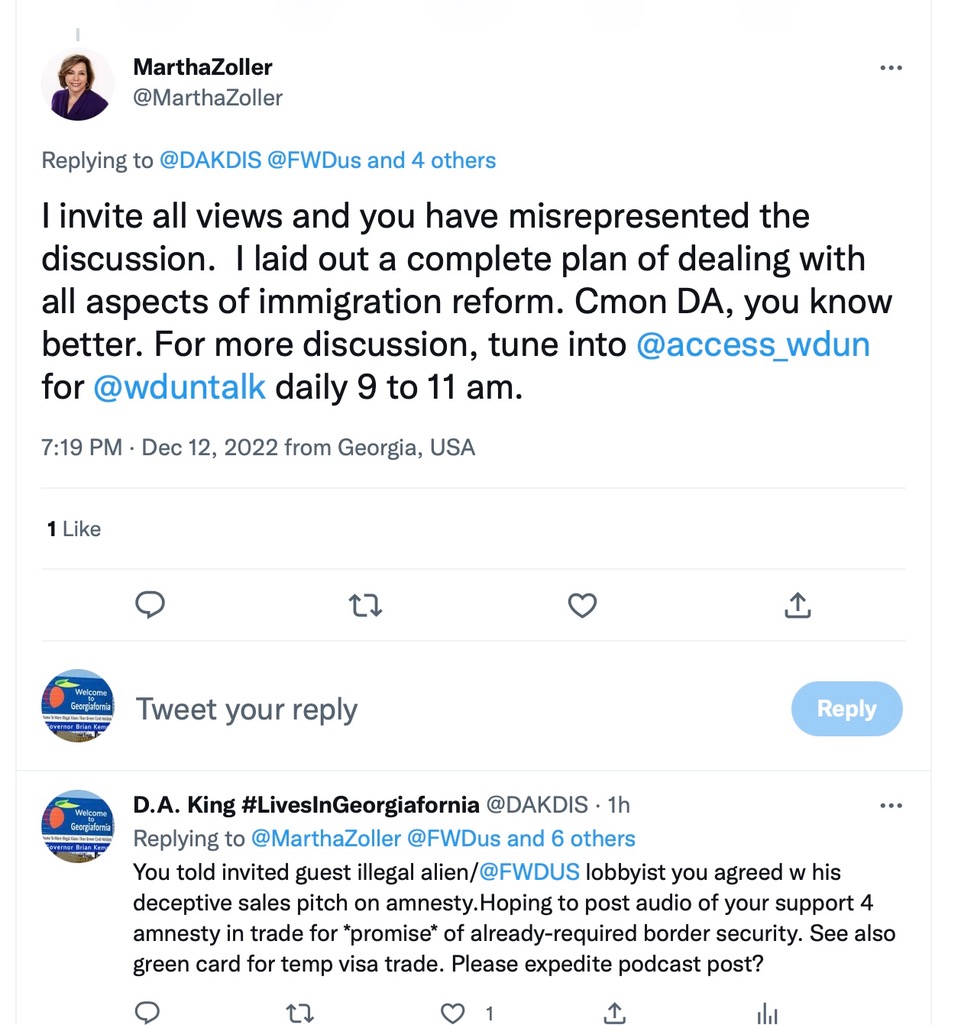 Martha had more to say about amnesty than what is included on her “show clips” that features the interview/sales pitch from FWD.us lobbyist Jaime Rangel. I am waiting to find the podcast of today’s show and will post the entire segment of the show in which Martha opined on the need for amnesty as a trade for a promise of future border security from the Biden administration. There is more.

Jaime Rangel’s joining me right now from Forward, and we’re gonna talk about this framework related to DACA, and, um, you know, it’s one of probably, uh, the most sympathetic groups of people that there are related to illegal immigration in America. Uh, and it’s something we’ve been talking about for a long time. And Jaime, first of all, thank you for coming in today, um, or being on the program today. Uh, it is something that people need to- to understand because we’ve been talking about this for a long time. There have been several solutions put on the table. Where are we today?

Well, first of all, thank you, Martha and all you for allowing me to be here this morning, and God bless you, to you and all your viewers out there. Where we are now, we’re in a, in a, in a position where there’s an opportunity to finally do something on DACA. Uh, recently, um, as you might have heard on the news, uh, Senator Sinema and Senator Tillis of North Carolina and Arizona have, uh, given a potential framework where a compromised legislation is possible. And at Forward, not only just at Forward, but as someone who is a DACA recipient myself, we’re encouraged by the reported talks and the bipartisan progress that’s being made right now.

And listen, Martha, like, you mentioned, you know, the American people want solutions. The issue o- of DACA is, you know, people support it and that will always support it. In fact, recent polling as of like 12 days ago I believe shows that overwhelmingly, including 70% of self identified conservatives support Republicans and Democrats working together now on immigration reform that’s strengthening the border. And allow people who were brought to this county, like myself, you know, to allow us to be a part of, continue being a part of the American dream. That’s what the American people want. And we need Congress to act now.

And I don’t disagree with you. You and I have talked about this for a long time. There have been opportunities in the past. And I don’t wanna belabor the past because the past is the past. We got a new group of players right now and hopefully they’ll do things. But, you know, whether it’s DACA, whether it’s codifying Roe V Wade, whether it is, um, dealing with a number of other issues that we have. There are too many people in Congress that would rather have it an iss- as an issue to talk about, and to raise money off of, than to actually find a solution. And until we get past that place in, in our history, um, we’re not gonna get the work done that we need to get done.

I don’t disagree. I mean I was in favor of what former President Trump put forward. Where I felt like it was a great compromise, where it was money for border security in exchange for the DACA, um, uh, the legalization of DACA kids and their parents. And, and of course that didn’t go through and I don’t wanna belabor the point because it’s a different administration, a different Congress. So what does this particular, uh, situ- framework, as they’re calling it, look like?

Well we don’t have anything in text so far right now, Martha. You know, they’re still working out the details. So I can’t really go into detail about something that I have, we have not seen on paper. But what I can tell your viewers is right now more than any other situation that we’ve had in the past, as I mentioned last time I was on your show, DACA’s under real threat in the courts. We’ve already seen that Judge Hanen out of Texas is more than likely gonna rule that DACA, um, the program itself is un-constitution. And the pathway through the courts, it does not work well.

So what does that mean down the road? Well it means that dreamers won’t be able to go to their jobs, they won’t be able to go to the hospital, where they’re being employed right now and helping the state. They won’t be able to go to our classes right now to teach the next generation of Americans. We’re looking at about, you know, one billion dollars being lost in the month in the US economy and the 1,000 people being pulled out of the workforce. And that’s real, that’s a real problem. In Georgia, we have 20,000 DACA recipients in this state who have a spending power of 1.3 billion, contribute over $100,000,000 in taxes. And we want these, we want, uh, we wanna stay in this state. We wanna stay in this country.

You know, I was brought to this, uh, this country when I was only a toddler. I took my first steps in American soil. I grew up and to this day will stand up and pledge to the greatest flag on Earth, and we need Congress to do something because there is a, a real threat. Um, and the what do, do we, you know, do we want our economy to grow stronger and for th- us to continue [inaudible 00:04:27], um, building jobs in our nation, or do we wanna deport, you know, 600,000 individuals back to a country that they don’t even know.

I think we should do what Ronald Reagan is protect and pass on lovingly that shiny city on that front, shiny city on a hill, and I know we have an opportunity with this framework. I’m encouraging all US Senators in our, in our Congress, congressional delegation in the house to get together. Enough with the finger pointing. We need y’all to negotiate, and we need you negotiating now.

I wanna see something that’s bipartisan, that’s well negotiated in a good faith effort that will pass the US Senate. We need 10 Republicans to come on board. We’ve, we’ve had I believe Republicans that have spoken favorably of dreamers in the past. And I believe the votes are there. We just need our senators in our, in our congress and DC to work together.

Jaime Rangel from forward.us, uh, we appreciate you being with us today and talking about this very important subject. Thank you.

Thank you so much Martha. God bless.