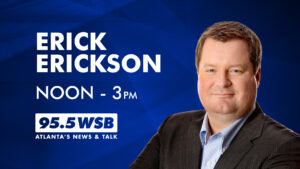 The below is related to the Erick Erickson radio show from WSB-radio in Atlanta, *Jan 24, 2023. Podcast here – S12 Episode 16, Hour 2.  Transcript on the bottom. Audio below. Below that, audio of the results of me trying to go on the air to ask Erickson about illegal aliens and state-funded private school tuition. I had a statewide column posted that day.

The below is most of an Erickson segment on “entitlements” and school choice. It’s Erickson’s advice to Republicans – focused further down on Republican state legislators in Georgia. I listen to the show only sporadically but have heard this same idea presented three or four times since last January (our legislature starts up in January) when I called in to suggest Erickson qualify that Georgia taxpayers should not be paying for private school tuition for illegal alien students or families. At the time he was selling the ridiculous HB 999 in the Georgia state House.

Using my iPhone, as I did last year, I tried to call in for this January segment too – I got a recording saying that “the party you are trying to reach at this time.” I tried it several times. Same recording. You can hear it in the below 10 second audio recording. Here is a photo of my iPhone screen after several tries.

Then I tried my land line. It went right through to Erickson’s call screener who asked me what I wanted to say and then my name, then told me to hang on for Erick. That was a little before 2:00 PM.

I put the call on speaker and listened as Erickson took four or five calls, including two on school choice. He didn’t put me on the air. The show was over at 3:00 pm. I tried to get on again about three months ago using my iPhone, but stayed on hold for about forty-five minutes before the show was over without being “picked.”

I can get to the call screener with a land line on a number I have never used to call in, but not on the iPhone number I usually use. I am wondering if Erick Erickson, Republican, conservative, national radio show host has blocked me. Could be…he is also a shameless Brian Kemp protector. I am not. I don’t think either one of them like my determination to expose Kemp, who is also shielded by the Georgia media – including the liberal AJC newspaper. There is no doubt that I am blocked at the AJC. 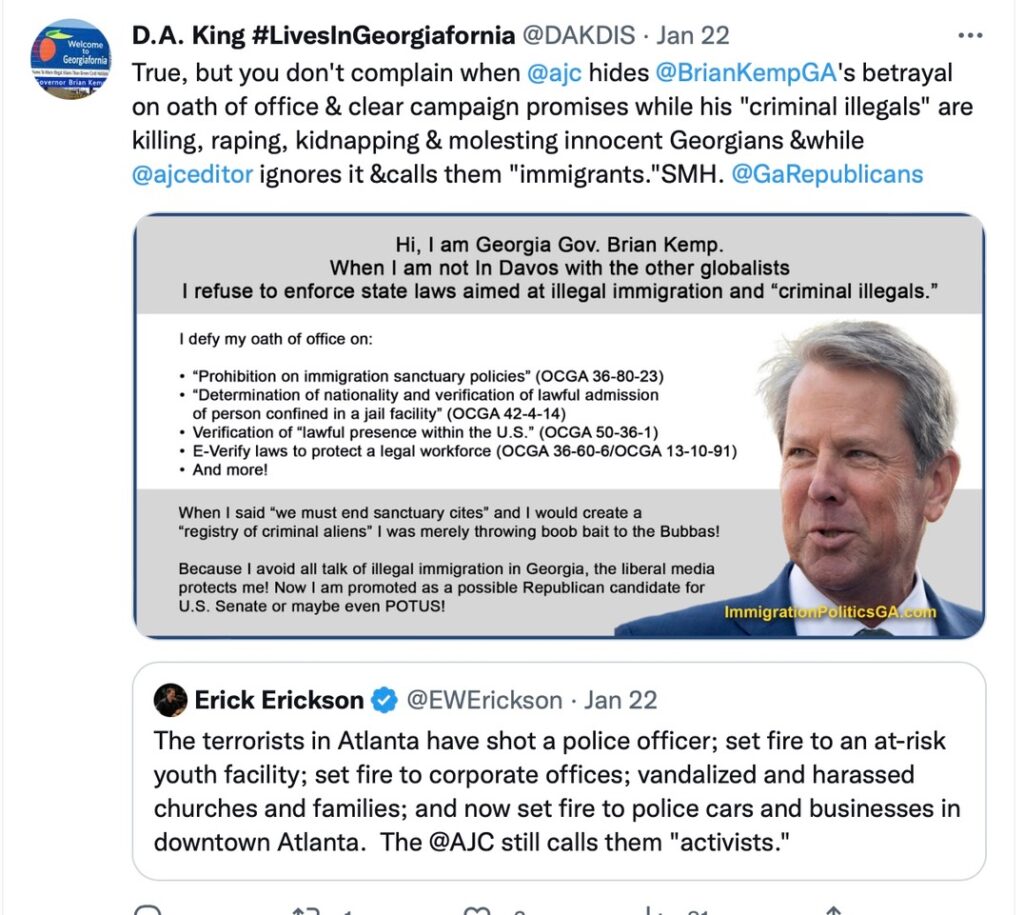 “…Actually did show up in the election and vote. The- the people who voted early, the people who voted on election day, they’re surveyed; we have lists of those people. Media agencies go out and find those people. And what we’re finding is that, uh, the cultural conservative values of the GOP, and particularly as the Democratic Party becomes Whiter and Whiter, the culturally conservative values of the GOP are resonating more and more with Black voters.

But, to Michelle’s point, it doesn’t seem like it’s significant because when you’re… when you go from 90% voting Democrat to 85% voting Democrat, you still got 85% voting Democrat. But to put this in further perspective, Brian Kemp got almost half of the Hispanic vote. In 2018, he only got 38% of it. That was a pretty significant shift. He also did better with Black… among Black men in 2022, than 2018.

Put it to you this way, if Republicans continue to improve with the Hispanic vote, Brian Kemp is term-limited, but if the next Republican governor in Georgia does the same in the Hispanic community and the same in the… in the White vote, he’s still gonna win. Republicans in Georgia are shifting the state and I firmly believe, those of you listening in Atlanta, in the state legislature right now, if you would pursue school choice, that issue resonates in the Black and the Hispanic community. You give an entitlement, these voters aren’t gonna walk back that entitlement. This is something you need to pursue.

Time for me to get on my soapbox. Let’s take a Republican and Democratic theory at face value. When you give an entitlement, that entitlement will not go away. Democrats have given Medicare and Medicaid, and Social Security, and healthcare, and you name it, and Republicans had never got rid of them. So, Republicans, here is an entitlement to give voters, give families, give citizens, and that is: The opportunity to pick the school of their choice for their children.

You do this in a place like Georgia where Republicans are beginning to make ground with Hispanic voters and Black voters, you’re gonna lock Republicans in for the next several decades because no Democrat running in 2026 is going to campaign on school choice; They’re gonna campaign on getting rid of it. They’re gonna claim, “It killed the public schools.” And you know what? All those parents, whose kids are suddenly getting a good education, they’re gonna vote Republican. This is how Ron DeSantis won in Florida; Andrew Gillum, his opponent, campaigned on finally getting rid of Jeb Bush’s school choice reforms. And Ron DeSantis won enough Black women and Hispanic women, that he barely won the governorship, but he did. And look what happened four years later? He improved school choice, he bolstered it, he strengthened it, he funded those schools.

You all focused on the culture war stuff. The people in Florida, they’re focusing on who we navigated COVID, how we navigated the economy and what he did for school choice. And they all voted for him. That Republicans nationwide are not rushing to school choice is… just shows you how stupid so many people in the party are. Democrats have, for years, given everything to voters and dared Republicans to take it all back. And when Republicans campaign on taking it all back, they lose. That’s why Donald Trump is out right now telling Republicans, “Don’t campaign on cutting Social Security. Don’t campaign on cutting and reforming Medicare and Medicaid. Don’t you dare do it, you’ll lose.” And Republicans are listening to him.

You give parents school choice and watch the GOP become the dominant party, and watch the kids thrive. This is the civil right issue of the day, and I cannot believe Republicans aren’t with the program. I can’t believe Republicans nationwide aren’t pushing this. In my state of Georgia, there’s a headline in the newspaper today, that there’s a renewed push to expand Georgia’s private school tuition subsidies. They want a hundred million dollar increase to Georgia’s Student Scholarship Program. So far, they only secured 20 million dollars. The chief architect of the scale back legislation, John Carson of Marietta, is proposing to expand the cap on the Tax Credit Program from a 120 million to 200 million dollars.

The American Federation of Teachers and The, uh, National Education Association are opposed, but the American Federation for Children supports it. Y’all, I- I can’t emphasize this enough: You’ve got to give school choice. You’ve got to allow parents to get their kids out of these public schools. Do you know where I am in Georgia? On Valentine’s Day last year, an elementary school gym teacher decided, on Valentine’s Day, to bring his first grade students into the gym and show them a video on same-sex love. I’m not making that up.

Parents, many of them didn’t know about it until I talked about it on this program. They found out from their first graders, that’s what happened at that elementary school. And the superintendent of the county education system sent me a very indignant letter.

Upset that I exposed what happened. There are a lot of private schools in that county. There are a lot of private schools that would love to take in Black and Hispanic students who are in those failing public schools, but it’s the Republicans who are blocking them. The Democrats don’t have the votes to stop it. The Republicans could embrace full school choice, and these private schools would bring these kids in, allow them in. Don’t- don’t punish the private schools that are Christian and run according to Christian guidelines, you don’t have to do that. Let ’em in and grow. Let ’em in and grow. Support them. You gotta do that.

This is the civil rights issue of our time. Republicans are failing on this. Don’t heap poor kids in failing public schools, when you have the opportunity to give them access to a private school where they can get a great education and become tomorrow’s entrepreneur. You support your job force, your workforce, your future by giving these kids school choice. Whenever you are nationwide, if you’ve got a Republican legislature and a Republican governor, and that’s the majority of the nation, you should be doing this. So, support tomorrow, today.

Now, you should go to edenpuredeals.com and get an EdenPURE Thunderstorm. You can get three of them for less than $200. You’re saving $200, and you get free shipping at edenpuredeals.com. You’ll be greeted with a discount code box. You can put in Erick…