A version of this column is published in the January 2, 2023 edition of the Glynn County, GA. newspaper The Islander.

“The Governor shall take care that the laws are faithfully executed and shall be the conservator of the peace throughout the state.” Section ll, Paragraph ll of the Georgia Constitution.

Gov. Kemp’s Georgia can easily and accurately be described as a “sanctuary state” for the “criminal illegals” he promised to go after when he ran for office in 2018 and pledged to end already illegal sanctuary policies.

With constant reminders that Georgia is home to more illegal aliens than Arizona and more illegals than green card holders, this space will often be used to offer continuing education on multiple laws that were put in place to deter illegal immigration into our state but are now ignored.

This week we’ll start with OCGA 42-4-14: “Illegal alien” defined; determination of nationality and verification of lawful admission of person confined in a jail facility.” It was put into law in 2006 in the “Georgia Security and Immigration Compliance Act” (SB 529) which was a long, multi-section bill that passed out of the state Senate committee process by the Public Safety Committee – Sen. Brian Kemp, Chairman.

Intended to detect illegal aliens who end up in any of Georgia’s jails and report them to the feds, the law is short and simple.

In part: “As used in this Code section, the term “illegal alien” means a person who is verified by the federal government to be present in the United States in violation of federal immigration law. When any person is confined, for any period, in the jail of a county or municipality or a jail operated by a regional jail authority … a reasonable effort shall be made to determine the nationality of the person so confined… a reasonable effort shall be made to verify that such foreign national has been lawfully admitted to the United States and if lawfully admitted, that such lawful status has not expired.

If the foreign national is determined to be an illegal alien, the keeper of the jail or other officer shall notify the United States Department of Homeland Security…”

Who runs most of the jails in Georgia? – county sheriffs.

The statute reads “The Georgia Sheriffs Association shall prepare and issue guidelines and procedures used to comply with the provisions of this Code section.” Those instructions are in place.

As a state senator at the time, Gov. Kemp also voted “YEA” for final passage on this public safety measure.

This writer has spent considerable time over the last several years talking to law enforcement officials and collecting responses to open records requests that tell me many – if not most – jailers in Georgia do not obey this law. I have spoken to sheriffs who have no recollection of ever even hearing about it.

We’ll revisit this topic next time, but until then I leave you with the defiant and unpunished public pledge from metro-Atlanta’s Democrat Gwinnett County Sheriff Keybo Taylor, made as one of his first remarks at his January 1, 2021 swearing-in event: “what we will not be doing is notifying ICE of anybody’s immigration status in our jail or any of our facilities.” 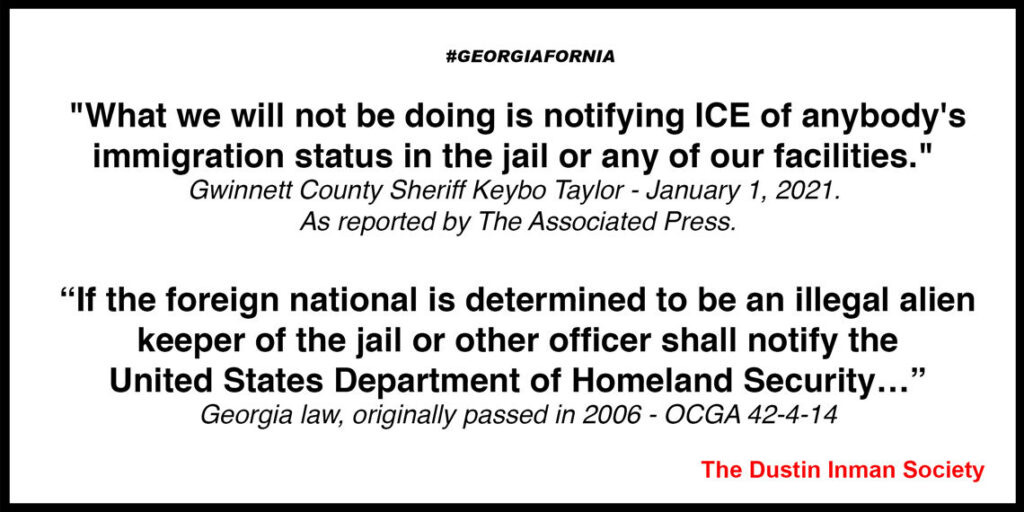 Sheriff Taylor has been allowed to keep his promise.

I don’t know how many innocent Georgians have been killed, raped, molested, or otherwise harmed by Gov. Kemp’s “criminal illegals” in the last four years – neither does he.

Please re-read the top paragraph of this column and consider calling the governor’s office in Atlanta. The phone number is 404-656-1776. Leave a polite message with the young staffer who answers. Nothing will change if you don’t.

The lack of enforcement of this law is not an oversight – but we are “number one for business.”