A New Beachhead Opens in the Biden Border Crisis

Del Rio, Texas – Thousands of mostly Haitian migrants (joined by Cubans and other nationalities) have poured entirely unopposed across the Rio Grande and occupied a massive beachhead here on the Texas side that is unparalleled in size, filth, and as an escalating management challenge to a Joe Biden administration that has so far refused to publicly acknowledge it. But this remarkable development in the border crisis will not be ignored for long as hundreds of new migrants per hour arrive, far faster than Border Patrol agents and National Guard personnel process them. 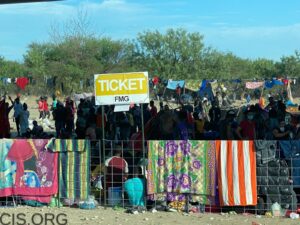 In barely a week, the number of illegal immigrants who have walked over a cyclically low Rio Grande reached 10,000, city officials – notably not federal representatives – said Thursday during a tightly managed press “tour” arranged by the city of Del Rio that was stopped some 200 yards from the migrants. The numbers appear to be growing by the hour with no end in sight, ballooning from some 2,000 on Sunday to 6,000 by Wednesday, to 8,000 by Thursday morning and then to 10,000 by that evening.

“In my 20-year career, I have never seen anything this out of control,” one CBP officer told CIS.

The migrants have spread out over a sandy mix of open and vegetation-thick land, the greatest concentrations centered for 200 yards under the international bridge but spreading westward along a riverbank “drag” road for at least a half mile. The migrants seem content – for now – to allow themselves to be contained by chain link perimeter fencing on the north to await Border Patrol “processing” into the United States as temporary legal residents. Most will end up taking buses or planes to resettle throughout the country on an honor system that presumes they will claim asylum at some point.

The Center for Immigration Studies gained rare access to the Del Rio beachhead Thursday afternoon and toured it by vehicle (see accompanying video at the end of this post), despite a media blackout ordered by federal authorities. At first glance, the constantly expanding throngs of roaming, moving, sitting, sleeping, working, and standing men, women, and children of all ages seemed as chaotic as any newly established developing-world refugee camp. 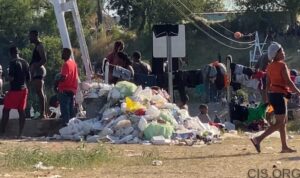 But soon, the outlines of some method to the mayhem began to come clear.

At the beachhead itself, there are two main breaches through which immigrants could be seen splashing across the river until reaching the Texas shore, with hundreds more lined up on the Mexican side waiting their turn. Border Patrol vehicles are parked at these Texas-side entry points, each with National Guard personnel inside, who merely watch the migrants illegally enter, dry themselves and family members. Some of those migrants then put on dry clothing.

Once they have gathered themselves and their belongings, they walk east along the sand drag road toward the bridge to take a numbered ticket from a station staffed by either Border Patrol agents or National Guard personnel. The tickets are akin to a standard carnival coupon and sit on tables in large circular rolls. Overhead signs at mobile shade stations for federal employees demark that this is where immigrants can take their ticket. In another line, immigrants who already have had their tickets for days stand in place for their number to be called. They will go through a preliminary processing and be taken to a Border Patrol station for further processing that will take a day or two. There, they’ll be released into the country with papers granting them temporary authority to remain and stating where and when they should report to U.S. Immigration and Customs Enforcement or an immigration office.

The exact motivation for this rush of Haitians remained a subject of speculation Thursday. CIS did not interview any of the migrants at length but will seek to do so and answer that question in coming days.

During the city’s near-site press briefing, Mayor Bruno Lozano said federal authorities have told him that so many immigrants have filled the site that wait times have reached three weeks at current federal resources.

In this calculus, of course, the wait times will only extend further the more migrants arrive from Mexico. And CIS saw migrants constantly arriving at the two packed river crossings. Some reports say tens of thousands more are heading to Del Rio through northern Mexico.

All of which explains other activity CIS saw at the beachhead. Migrants were building huts out of available materials, clearly planning to stay for a time. In fact, a makeshift village was forming. Some families brought camping tents. Others were tearing down trees for branches to use as framing over which they might put a tarp or blanket.

Other processes seem to be developing for basic needs. For instance, CBP has expanded the number of portable toilets but is not, evidently, providing food or water. Hence, CIS noticed a steady counter-traffic of people crossing back into Mexico, against the flow of new arrivals or returning procurers, to purchase food, fresh water, and other necessities and then to bring the items back into the beachhead. At the crossing points, therefore, crowds of people swirled and mingled, some carrying retail goods on their heads.

The migrants bathe in the Rio Grande and wash their clothing, leaving it to dry on lines strung between trees or on rocks.

Everywhere, trash piled up and lay strewn along the ground….Please read the rest here from CIS.org