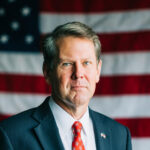 The governor shall “take care that the laws are faithfully executed and shall be the conservator of the peace” in the state. This power to enforce laws is almost identical to that of the president of the United States. He or she has the power to veto legislation, although the Georgia General Assembly can override the governor’s veto with a two-thirds majority in each chamber.