Georgia state Rep Chuck Martin, Chairman of the House Higher education Committee is quoted in the liberal AJC as saying that the legislature will work on rewarding illegal aliens with instate tuition next year.

From the liberal AJC: “Chairman Chuck Martin, R-Alpharetta, did not motion for the committee to vote on the bill, and he said it could conflict with federal immigration law. He said he wants to wait for a U.S. Supreme Court decision on DACA that’s expected later this year.”

“We’re going to work toward something in the next legislative session” is the quote from Rep Chuck Martin concerning changing state law so that illegal aliens could access the lower tuition rate that is not available to Americans from other states like Michigan or Ohio, for example. 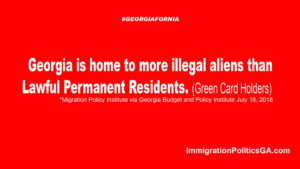 Martin was commenting on his committee’s lack of a vote to advance a bill from Dalton Republican Kasey Carpenter (HB 997) and several Democrat cosponsors that would have changed state law so that illegal aliens would be eligible for the much lower instate tuition rate from which they are now excluded. The story from the liberal AJC can be read here.