Candidate for Lt. Governor and current President Pro Tem of the state senate, Sen. Butch Miller Miller, has come out in support of giving the illegal aliens with DACA a lower tuition rate in public colleges than U.S. citizens and legal immigrants from other states.

Thanks to a Twitter post from an elated  former GALEO staffer and illegal alien DACA recipient, Jaime Rangel, who lobbies for FWD.us under the Gold Dome (yes, really) we see a January 7 report from the liberal Gainesville Times with that policy nugget.

The Georgia Chamber of Commerce is also pushing hard for that action. 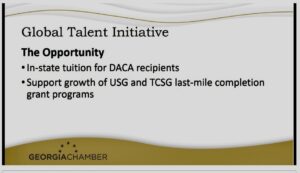 Boiled down for those new to the issue, there are about twenty thousand illegal aliens living in Georgia with a deferral on deportation proceedings because they came to the U.S. as “children.” That number could soon zoom up because of Biden’s “ya’ll come!” policy on our southern border.

Currently the University System of Georgia (and the Technical College System of Georgia – TCSG) offers essentially two levels of tuition rates – instate and out of state. For academic year 2020-2021, the average tuition & fees for colleges in Georgia was $4,739 for instate and $17,008 for out-of-state according to experts at collegetuition.com. It’s pretty simple: Georgia residents pay less to attend Georgia’s public universities and Tech colleges than a student from Michigan or Arizona, for example.

The news of Miller’s support comes in the Gainesville Times report “5 issues to watch to watch from Hall County legislators in 2022 session.”

State and local educators say they are pushing for traditional issues, such as fully funding schools and more transparency in voucher funding.

“We’re optimistic going into this legislative session that — both in the mid-term adjustment they give us but also the budgeting for next school year — that the austerity will be reduced, if not completely removed,” said Jeremy Williams, Gainesville City Schools superintendent.

In past tight budget years, austerity cuts from education have been used to help balance budgets.

“They graduated from Gainesville High school, they’ve been here X number of years and what we’re doing is we’re basically losing a potential workforce,” he said.

Miller is also is a proponent of easing that restriction.”If we want these young people to be productive members of our society and contribute, then we’re going to have to educate them and not put them at a disadvantage,” he said.”

We should note that DACA is temporary scam and an illegal Obama administrative reelection end run around congress that a federal judge has found to be unlawful – and DACA recipients already have work permits. DACA status does not provide any legal status or lawful presence. We’ll have much more soon.

Related: HB 120 from Republican Kasey Carpenter (Dalton) is pending under the Gold Dome and is the legislative vehicle the corporate-funded anti-enforcement lobby (including the Georgia Chamber of Commerce) is pushing to get special tuition rates for the illegal aliens discussed above. You can read more on that here.