Update: July 28, 2022: I sent an open records request to the Cobb Sheriff’s office asking for copies of documents that would show compliance with state law on checking immigration status of prisoners and reporting illegal aliens to DHS and received a response. There is no record of compliance with the state law, OCGA 42-4-14.

“No drivers license” is usually the tip-off that a foreign national is an illegal alien. 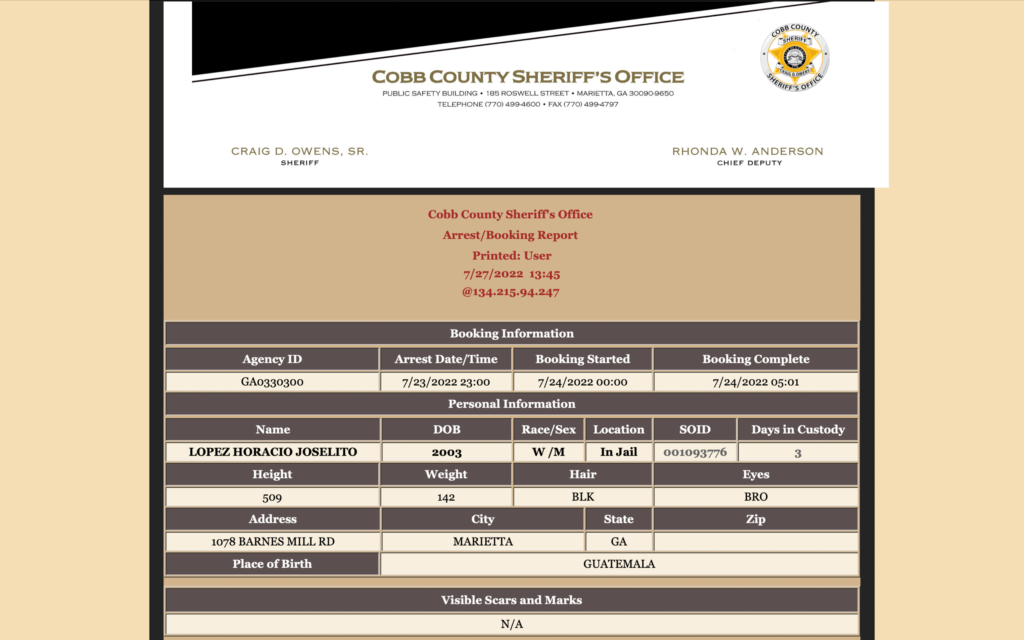 “Lopez-Vail was arrested and charged with

Georgia state law (OCGA 42-4-14) requires all jailers to check immigration status of prisoners and to report illegal aliens to U.S. DHS. The sheriffs in Cobb and Gwinnett counties have publicly admitted they do not obey that law. This defiance of the law by these sheriffs is not “news” in Georgia. See also “not news” in the MDJ.

MARIETTA – Marietta police said officers charged a teenage suspect in an alleged hit-and-run that hospitalized a man and 6-year-old boy.

Police identified the suspect as 19-year-old Horacio Lopez-Vail. Police said Sunday that the man and child were still in critical condition.

Police believe the teenager struck an unidentified 30-year-old and 6-year-old at around 9 p.m. on Friday on Chert Road. Following the crash, first responders rushed them to Wellstar Kennestone and Children’s Healthcare of Atlanta, respectively.

Police said the pedestrians were walking along Chert Road between Roswell Road and Gresham Road when a car hit them from behind. The driver, police said, fled the scene without contacting police. Police shared an image of a dark-colored Toyota Corolla and asked for the public’s help in finding a suspect. Police arrested Lopez-Vail on Saturday night.

Police charged Lopez-Vail with two counts of failure to maintain lane, serious injury by vehicle and felony hit-and-run. He’s also charged with driving on the wrong side of the road, driving without a license, reckless driving, driving while distracted, duty to report striking a fixed object and tampering with evidence.