Steven A. Camarota is the director of research and Karen Zeigler is a demographer at the Center. Jason Richwine, PhD, is a public policy analyst based in Washington, D.C., and a contributing writer at National Review.

Under current law, illegal immigrants are not allowed to participate in the healthcare exchanges established by the Affordable Care Act (ACA). As a result, they cannot receive Advanced Premium Tax Credits (APTC), which are the subsidies paid to insurance companies to help low-income people afford coverage. Illegal immigrants are also generally barred from participating in Medicaid, with the exception of minors in certain states and pregnant women nationwide. At the June 27 Democratic presidential debate, all of the candidates endorsed giving government health benefits to illegal immigrants, but there was no discussion of exactly how that would work or how much it would cost. According to a subsequent survey by The Atlantic, Bernie Sanders, Kamala Harris, Elizabeth Warren, Cory Booker, and Julian Castro all would “provide full benefits to the undocumented.” On the other side of the spectrum, Michael Bennet and Joe Biden suggested only allowing illegal immigrants to buy unsubsidized insurance on the healthcare exchanges.1

In response to these proposals, the Center for Immigration Studies has issued two new reports. The first report details the participation rate and cost of Medicaid usage by immigrants under existing policy, which offers noncitizens less access to the program compared to citizens.2 This second report explores the added costs of offering public health benefits to illegal immigrants.3

The two public health benefits typically offered to low-income uninsured people are ACA subsidies and Medicaid. There are nearly five million illegal immigrants in the country without health insurance with incomes low enough to qualify for these benefits. Since the average annual cost of these benefits is several thousand dollars per person, the total price tag for insuring illegal immigrants must be in the billions of dollars. Assuming 100 percent enrollment, we calculate the annual cost of providing ACA subsidies to be $22.6 billion, and $19.6 billion if illegal immigrants receive a mix of ACA credits and Medicaid. Assuming likely enrollment rates, the costs would be $10.4 billion for an ACA-only approach and $10.7 billion for a mix of ACA subsidies and Medicaid.

How the ACA Works

Those with incomes under 400 percent of poverty ($83,120 for a family of three in 2018) are eligible for ACA subsidies that reduce the amount they pay for health insurance. ACA subsidies are typically paid by the federal government to insurance companies on behalf of low-income consumers who buy health insurance on the federal or state-run exchanges.4 For the most part, those purchasing insurance through the exchanges are either self-employed or not offered insurance through their employer.5 The ACA was designed to provide Medicaid coverage to all adults with incomes below 138 percent of poverty ($28,676 in 2018 for a family of three). Empowered by a 2012 Supreme Court ruling, many states have chosen not to expand Medicaid coverage, but ACA subsidies are still available to all low-income people (except illegal immigrants) in non-expansion states.6

The size of the ACA subsidy primarily reflects a person’s age and income, with income measured relative to the poverty threshold. The size of the subsidy goes up as a person’s income goes down. Those with the lowest incomes are typically on Medicaid, especially in the expansion states. Factors such as overall health or pre-existing conditions do not impact the size of the premium or the subsidy.

A detailed explanation of methods can be found at the end of this report. To summarize, we estimate the age and poverty status of illegal immigrants based on Census Bureau data and then calculate an ACA subsidy for those with incomes low enough to qualify. For the lowest-income uninsured illegal immigrants, we also estimate the cost of providing Medicaid based on state of residence, age, and disability status. Costs are calculated alternatively under the assumption of a 100 percent enrollment rate for all eligible illegal immigrants, and also under the assumption of a lower “likely” enrollment rate. 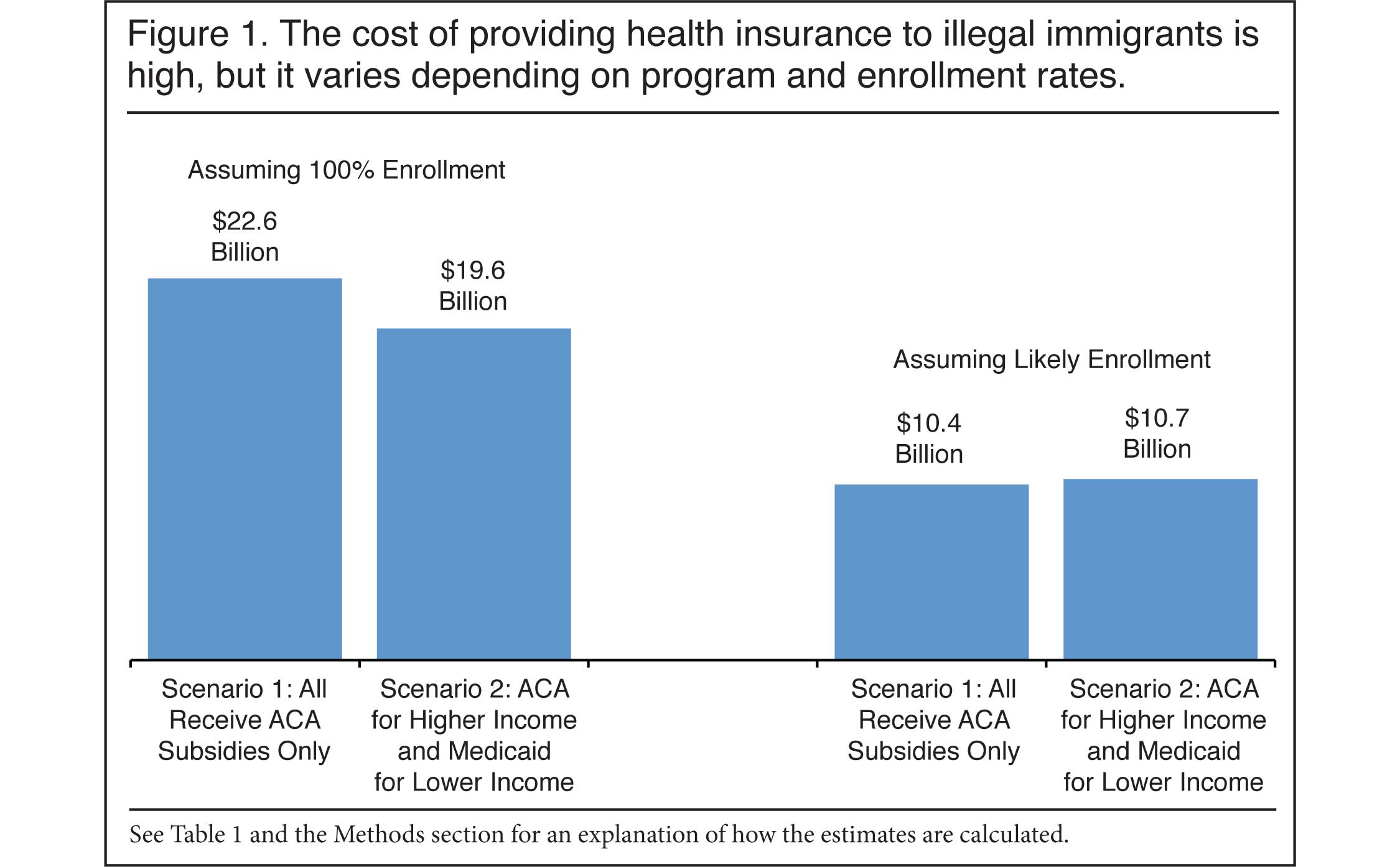