Tony Blinken recently made a trip to Panama for a press conference and photo op with Panamanian authorities concerning migration north to the United States through their territory. The average American probably assumes that Blinken as Secretary of State was there to discuss ways to curb the flow of people northward.

That would be logical. It would also be very wrong.

“So we have just concluded a set of ministerial meetings to discuss a challenge that affects all 22 countries represented here: managingmigration in our hemisphere.”

“Here in Panama, we talked about some of the most urgent aspects of this issue, including helping stabilize and strengthen communities that are hosting migrants and refugees; creating more legal pathways to reinforce safe, orderly, and humane migration.”

“We’re proud to be the largest humanitarian donor to international organizations in Panama, and their work complements Panama’s own assistance to migrants and refugees.”

Blinken was accompanied by Department of Homeland Security (DHS) Secretary Alejandro Mayorkas. His job is theoretically to keep our borders secure. His comments were, if anything, even more clear than Blinken’s. Mayorkas was not in Panama to talk about stopping illegal migration at all.

“So, our plans have a number of different components to them [among them] to build legal, orderly, and humane pathways so individuals do not need to place their lives, their well-beings, the well-beings of their loved ones, in the hands of smugglers and traffickers who only seek to exploit them for profit.” 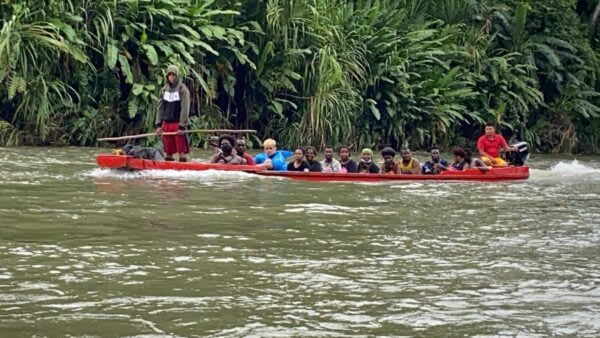 Blinken and Mayorkas weren’t in Panama to talk about stopping migration north. On the contrary, they were there to discuss how to deepen American aid and support to Panamanian efforts to facilitate migration. Blinken and Mayorkas don’t want to leave migrants in the hands of traffickers. They want to expand an already extensive system of government support to illegal migration funded by the American taxpayer.

One of the ways the United States aids illegal migration is through funding of United Nations programs administered by the International Organization for Migration (IOM). IOM runs camps and helps migrants move north. It also hands out debit cards paid for by American taxpayers to migrants.

Photo I just took of a Honduran migrant woman’s United Nations-issued cash card, which provided 2,500 pesos a month for 4, the max in this one city of Tapachula, Mexico. All part of the UN “cash-based interventions” program I wrote about last month here: cis.org/Oped/United-Na…

Something called the Emergency Manual for IOM lays out procedures for handing out these debit cards. It also explains that IOM disburses cash to migrants and “movement assistance.”

This US-bound Haitian in Tapachula, Mexico complains that the UN failed to make its January payment to him and now his UN debit card is empty…

The IOM does all this in a network of roughly 100 shelters it has built with U.S. taxpayer support all across Central America. How much money the United States is funneling into these efforts is a little unclear. Since Biden came to office a cloak has been pulled over the details. The Biden 2022 budget includes $10 billion in humanitarian assistance “to support vulnerable people abroad.” But there’s no breakout of where that money goes

In 2019 before Biden came to office and funding was dramatically expanded, the State Department’s Bureau of Population, Refugees, and Migration (PRM), which provides U.S. funding to the IOM and many other United Nations agencies spent more than $60 million for activities in the northern part of South America, Central America, and Mexico. As of that time, the State Department was supporting at least 75 way-stations across the region to provide food and shelter for migrants moving north.

In effect, a giant conveyor belt has been constructed across Central America to the U.S. Mexican border. Largely funded by the American people, this machine moves migrants methodically north from way-station to way-station, housing migrants, feeding them and when necessary, just handing them cash. Todd Bensman of the Center for Immigration Studies described it to Breitbart News this way. recently

“It is definitely organized. They’re giving money out at way-stations up and down the [migrant] trail … There’s a process [in Tapachula]: You get your Mexican [visa] papers, then you go to the UN building next door, get an appointment, and they interview you and look at your situation…  It’s not big money, and not all of them get it, but enough get it to sustain them so they don’t have to go home, and so they can go on to the next way station.

None of this is being done pursuant to a bill passed by Congress. The American people never looked at the world situation and decided to spend their money to help people enter our country illegally. In fact, the… more here.