Biden officials admit they expect up to half a million border crossers and illegal aliens — the equivalent of Atlanta, Georgia’s, resident population — to arrive at the border every month.

President Joe Biden’s administration has released more than 750,000 border crossers and illegal aliens, a foreign population larger than the population of Boston, Massachusetts, into the United States since taking office in January 2021, a court brief confirms.

The brief, dated April 14 and filed in the Supreme Court by Stephen Miller’s America First Legal Foundation, details the extent to which Biden’s Department of Homeland Security (DHS) has put its Catch and Release network into overdrive in just a little over 12 months.

Specifically, DHS has released more than 756,109 border crossers and illegal aliens into American communities from January 21, 2021, to February 28, 2022, the brief states. This is larger than the resident population of Boston, about equal to the size of Denver, Colorado, and larger than the population of Detroit, Michigan.

Releases by month are as follows: 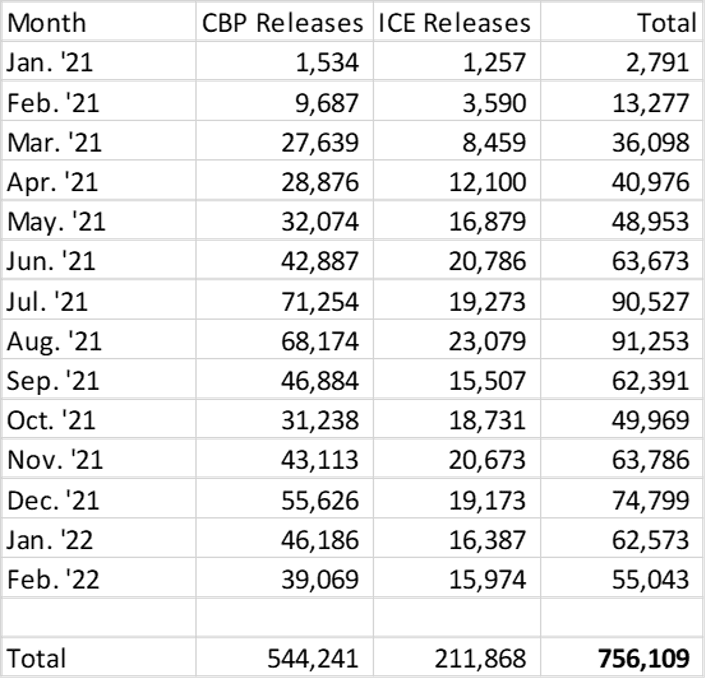 At the current rate of deportations, which have been gutted by Biden’s so-called “sanctuary country” orders, it would take ICE agents 14.5 years to deport the border crossers and illegal aliens released into the U.S. interior by Biden’s DHS.

That 756,109 total does not include the 500,000 illegal aliens who successfully crossed the U.S.-Mexico border in 2021 without being apprehended, nor the nearly 123,000Unaccompanied Alien Children (UACs) that have been resettled across the U.S. since the beginning of Fiscal Year 2021.

Altogether, the Biden administration is likely to have welcomed nearly 1.4 million border crossers and illegal aliens into American communities since January 2021.

The figure comes as Biden plans to end the Title 42 border control authority first imposed by former President Trump in 2020. The authority has successfully prevented waves of illegal immigration in the name of public health.

Biden officials admit they expect up to half a million border crossers… more here.