It took almost two years of part time work as donated funds became available, but the Dustin Inman Society finally has a new website. We hope you will take a look when you have time and visit often. It will be updated regularly.

As Georgia’s only activist pro-enforcement group, we are proud of the difference we have made since 2005 and that the vast, corporate-funded illegal alien lobby cannot control or conceal their hate for us.

The new DIS blog is on our homepage

The current top story on the DIS blog is the fact that longstanding Georgia law requires jailers to report illegal aliens to federal enforcement officials. Don’t be surprised that this fact has not been in “the news” – but that the liberal media is thrilled to report that incoming sheriffs in Gwinnett and Cobb Counties have promised not to report illegals to ICE.

What we will not be doing is notifying ICE of anybody’s immigration status in the jail or any of our facilities,”announced Gwinnett Sheriff Kebo Taylor January 1st. 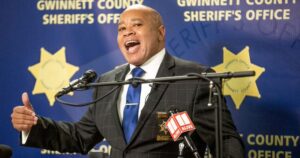 We will be asking for your help with phone calls and emails to push Georgia officials to enforce the law – even for Democrat Georgia sheriffs. With more illegal aliens than Arizona, Georgia is a much more dangerous place since the November elections.

Also on the new DIS blog:

You can also see a recent news story in the Washington Times featuring the Dustin Inman Society and an analysis/opinion response from us.

We have spent countless hours researching compliance with Georgia’s 2011 law requiring most private employers to use the E-Verify program. Please see the media release that went out outlining the complaint we filed against the City of Dalton and a state Rep business owner who appears to have filed false documents on compliance. We do not expect news coverage or an official investigation.

The new website was created with donations and the hope that we can save some lives and maybe even the rule of law here in Republican-ruled Georgia. We are sorry to say that chances are not good.

We wish you a Happy New Year.