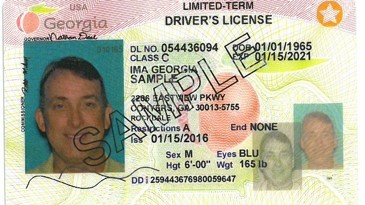 From the Wayback File:

Some illegal immigrants can get Georgia driver’s licenses

Posted Aug 23, 2012
ATLANTA – Illegal immigrants who are granted permission to stay in the country under an Obama administration policy that was announced in June will be eligible for drivers’ licenses in Georgia, the state’s attorney general wrote in a letter to the governor.

“While I do not agree with the actions of the President in issuing the directive, it has been implemented by the Department of Homeland Security, USCIS (U.S. Citizenship and Immigration Services), and state law recognizes the approval of deferred action status as a basis for issuing a temporary driver’s license,” Attorney General Sam Olens, a Republican, wrote in a letter obtained Thursday by The Associated Press.

Olens said illegal immigrants with the special status would not, however, be eligible for a state identification card. He says such cards are considered public benefits which are not available to illegal immigrants.

Under the policy – which was announced in June and took effect last week – eligible immigrants must have arrived in the U.S. before their 16th birthday, are 30 or younger, have lived here at least five years, and are in school or graduated or served in the military.

They also must not have a criminal record or otherwise pose a safety threat. They can apply to stay in the country and be granted a work permit for two years, but they would not be granted citizenship.